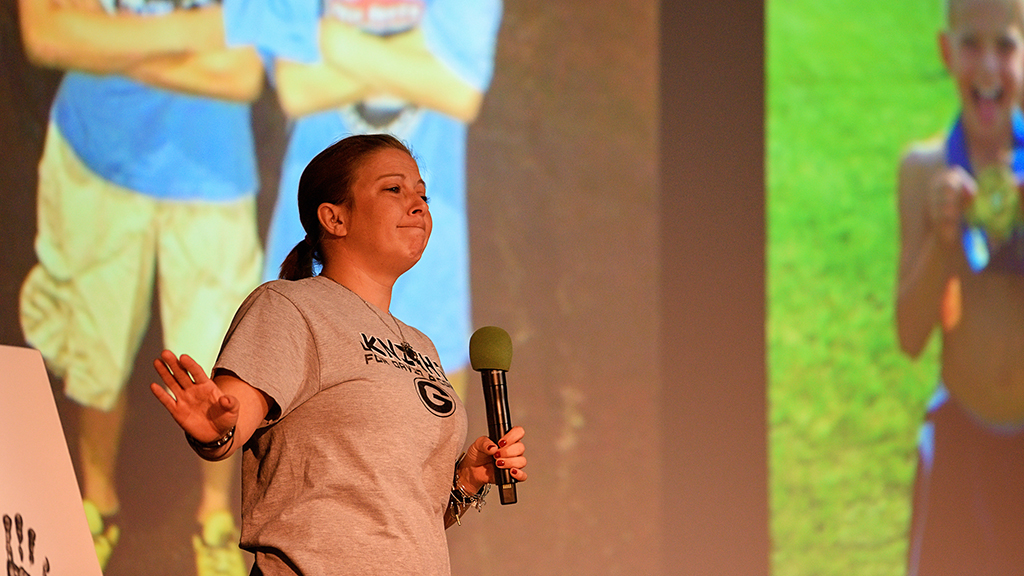 “I didn’t enforce it and that is a regret I will have for the rest of my life” says Aryn Waag as she describes the death of her son in horrific detail at the #safeTEENfirst event last night. Andrew Grimm | PHOTO

“I didn’t enforce it and that is a regret I will have for the rest of my life.”  Those are the words of Aryn Waag as she tells the story of how her son David elected not to wear a seatbelt as a backseat passenger when he was involved in a fatal crash on Wilkerson Road in Greene County in August of this year.

Waag spoke to an audience of teens and parents and other adults at the John Legend Theater in Springfield on December 15, 2017 as part of the #safeTEENfirst presentation for anyone living in Clark County.

Trooper McCloud of OSP shared that there has been a 7.2 percent increase in the number of fatal accidents due to distracted driving this year across the country.  He explained to those present that if a trooper finds you texting or being involved with your phone or other device while driving it is an offense that can result in a $180 fine for the first ticket.  A second ticket is $200 and the loss of your license.  “We want to save your life” said McCloud of the reasoning behind the traffic stops and penalties.

Nationwide there were 35,092 fatalities in 2016 with 35 percent involving teen drivers.  Now three local Greenon High School students will be counted in the 2017 statistics that are on the rise.  According to McCloud the deaths equal out to one per day for distracted driving.  He noted that a driver is distracted for 4.1 seconds which does not seem like a lot by text messages but the fact that your vehicle travels the length of a football field in that time is sobering.

The message from all of the speakers was clear; passengers also need to be responsible for their interactions during a ride in a vehicle.  “Let the driver drive” said McCloud of the interaction seen by many law enforcement officers related to passenger interactions.  “We want you home with your family” he said in regards to the number of times officers must make a visit to inform loved ones of a death in an accident.

A resounding message to all drivers is the fact that they are responsible for their front and backseat passengers.  All of the speakers including the family members of David Waag and Conner Williams encouraged drivers to require all passengers to wear a seatbelt and to ignore their phone and other distractions when behind the wheel.  Eating, changing the radio and adjusting the climate controls have all lead to serious accidents according to the experts.  For parents, the Ohio law requires that all children under the age of 16 be in a seatbelt and other safety seats while riding in a vehicle.

Devin Williams, Conner’s sister also shared a letter written by her mother recounting her experience at the accident scene in August and in the days following.  She then recounted her experiences as the officials came to meet with the family to describe the accident and cause of death.  She spoke as only a young person not far from the age of the target audience could.  “I want you to be brave enough for your safety and everyone else” she said as she encouraged anyone who might be uncomfortable with the actions of a driver to stand up and request that they be left behind. 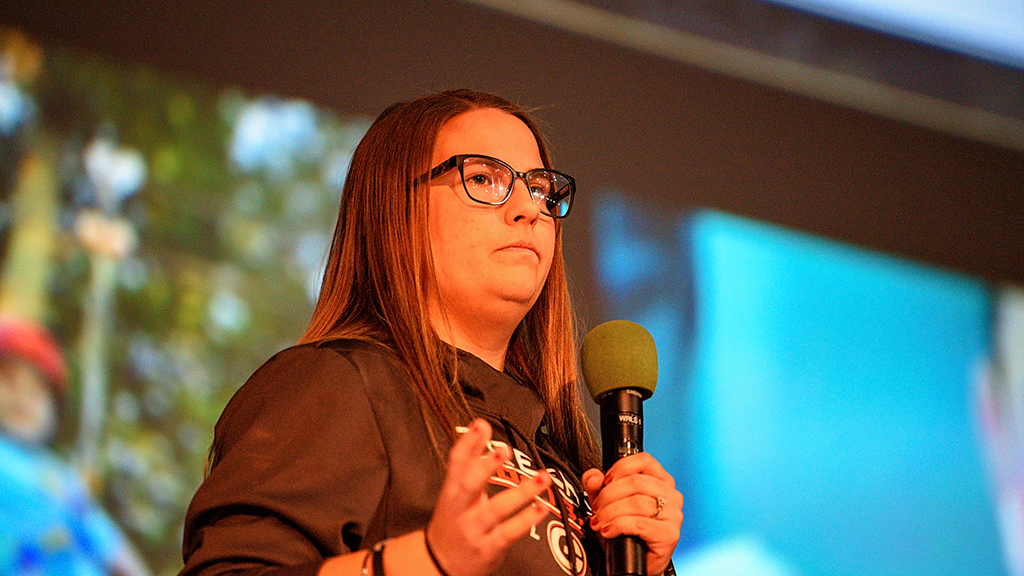 Aryn Waag and Devin did not hold back on their sharing of details of the accident and the resulting injuries.  They speak to the young men and women as if they are part of their extended family in hopes of bringing a sense of reality to the consequences of decisions made by inexperienced drivers and young passengers.  As Waag embraces the container that holds her sons cremains she tells the audience “I have memories and I have photos” ending with “drive safely and smartly”.

Organizer Laura Wiedemann follows up the speakers by having everyone in the audience, young and old repeat the pledge designed to inspire safety on the roads.  Before leaving, everyone has the opportunity to add their hand print to the next Pledge Tree that has become a symbol of the movement.  Julie DePhillips joined  the organizers and speakers during the handprint session.  She lost her son Kenny in a tragic accident on Apple Butter weekend in Enon which left the Greenon Local community in shock and three families bonded by driving related events this year. 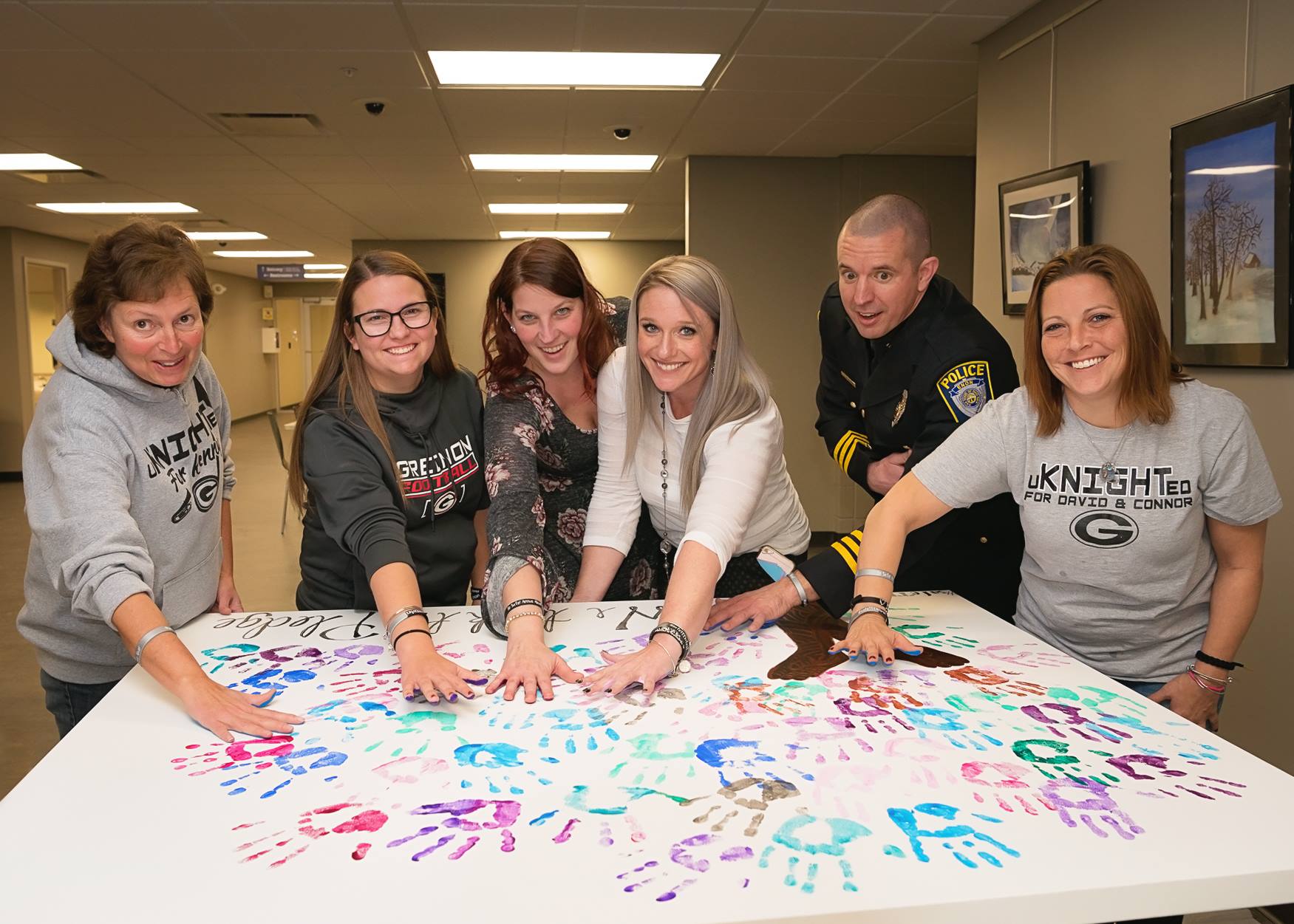 The Ohio Legislature is currently looking at changes to the rules for teen drivers with bipartisan support in Columbus.  The changes would include requirements for teens to drive during four seasons with an experienced licensed adult prior to receiving their permanent license.  It would also change the curfew to 9:00 pm for young drivers to be out on the roads.

Greenon Local Superintendent Brad Silvas was on hand to accept the canvas that features the hand prints of the original presentation held in Enon on November 18.  The Pledge Tree will be displayed at Greenon High School in the coming weeks to promote safe driving and encourage teens who may not have participated in the event to seek more information on how they can “Be Safe and Arrive Alive”.