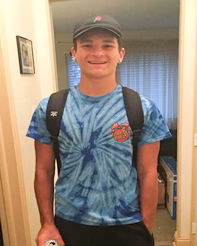 15, of Fairborn entered the gates of Heaven on Sunday August 20th, 2017 in Greene County.

Connor was a beloved member of the Greenon community, participating in sports from a young age through high school. Connor was a standout football player, excelling in any position he played, especially running back. Connor also wrestled in middle school, willing to take on any opponent with enthusiasm (though his favorite sparring partners were his father and older brother).

Connor never knew a stranger, and would light up a room with his endearing smile and infectious laugh. He thoroughly enjoyed everything about exotic cars; from the age of seven, Connor could name the year, make, and model of nearly every car on the road. Connor also had a love for animals that knew no bounds; he enjoyed catching frogs in the creek, collecting lizards and snakes, and rolling around the floor with the three family dogs.

One of Connor’s all-time favorite activities was to spend time with any of his numerous friends riding bikes, listening to music, fishing, or playing sports in the streets around Holiday Valley. Connor had a love for God that he was not afraid to show. He loved listening to the Christian radio station, K-Love, with his mother and sister in the car. He loved attending the Ginghamsburg Church youth group at The Avenue, and offered to lead the football team in a team prayer before games.

Connor is preceded in death by his aunt, Amye Rose, maternal grandmother Debbye Wyss, and great-grandparents, William Wyss, and Lawrence and Marlene Rose.